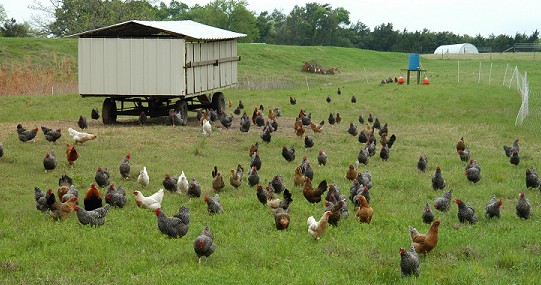 While out searching for farmland one day, I encountered an elderly woman at the bus stop and struck up a conversation with her. When our conversation turned to farming, she recalled that she used to grow vegetables and raise chickens, and that this practice significantly reduced the amount of pests she had to deal with. The chickens pecked at the ground, eating the pests, and the seeds (and roots) of weeds. By simply feeding themselves, the chickens helped her to dramatically reduce pest and weed problems without  using any chemicals!

In the past, many farmers also raised pigs that were fed with plant waste. This created another win-win situation. The plants and parts of plants that humans didn’t or couldn’t eat were used to fatten up pigs. Plant waste was recycled as pig feed. Kitchen waste (that now makes up 40% of the garbage going to our landfill) was also turned into pig feed. According to the SCMP, the recent increase in the garbage going to our landfill can partly be attributed to the reduction in the number of pig farms in Hong Kong.

Today, growing crops and raising animals together is not possible. It is illegal to keep pigs or chickens without a license. Due to fear of swine and bird flu and to reduce pollution, the Hong Kong Government has not only stopped issuing licenses, but has been buying back existing licenses.

Rather than making us safer, the Government has simply outsourced the oversight of meat production to mainland officials. The Government’s position is that animals should not be raised in proximity to large population centres such as Hong Kong. However, prior to the opening of China in the 1980’s, most of the meat consumed in Hong Kong was in fact produced locally.

According to the former head of the veterinary unit at the Agriculture, Fisheries and Conservation Department (AFCD), the policy of shifting meat production to the mainland has in fact made us less safe. Animals reared on Hong Kong farms are raised under strict Government inspection regimes. Conditions on the mainland are significantly laxer. In our interconnected world, zoonotic diseases (diseases transmitted between animals and humans) from farms in the mainland are now just a bus, truck or train ride away.

Animals and humans have been living in close proximity since humans learned how to domesticate animals. The primary cause of zoonotic diseases today is the unhealthy conditions under which animals are being raised. According to the National Academy of Sciences, intensive food-animal production has epidemiological consequences. Animals are permanently housed and not allowed to graze. They are raised as a single species in crowded conditions. And sick animals are helped to survive (with antibiotics) and excrete pathogens. These conditions promote the incubation and spread of diseases.

By reversing the policy of transferring meat production to China and allowing integrated farms to exist, the Government can ensure the safe production of meat, decrease farmers reliance on chemical pesticides and herbicides and reduce the amount food waste going into the landfill.  This however may not be a priority for a Government that seems intent on turning our farm land into concrete jungles in the name of economic development.