PRICE HK$ 52 for a lunch set including soup and drink

FOOD RATING Good healthy lunch. The food is quite bland but nicely presented with a delightful array of colors and textures. The fare is very light, containing little salt or oil. If you’re used to eating meat for lunch, you’ll probably need a snack a few hours later. After eating a meal at Soland, I feel about 80% full rather than completely stuffed, which is recommended by many health experts as the correct way to eat. The food is served lightly warmed (rather than piping hot) which I don’t like.

GREEN RATING Deep Green even though it is not organic. A vegan diet excludes all animal products (no meat, dairy, eggs or fish). A completely plant-based diet eliminates the huge loss of calories that result from converting (feeding) grain to livestock, thereby reducing agriculture’s impact on the environment. According to a report published by the UN’s Food and Agriculture Organization (FAO), livestock generates more greenhouse gas emissions  (18 percent) than transport! It is also a major source of land and water degradation.

LOCATION Between Sheung Wan and Central. Entrance is the first doorway in the alley to the left side of Capo’s Expresso – walk up 3 floors. See Open Rice for a map.

What do Bill Clinton, Natalie Portman and Mike Tyson have in common? They are all vegans. In the Businessweek’s The Rise of the Power Vegans, Joel Stein writes:

It used to be easy for moguls to flaunt their power. All they had to do was renovate the chalet in St. Moritz, buy the latest Gulfstream jet, lay off 5,000 employees, or marry a much younger Asian woman. By now, though, they’ve used up all the easy ways to distinguish themselves from the rest of us—which may be why a growing number of America’s most powerful bosses have become vegan. Steve Wynn, Mort Zuckerman, Russell Simmons, and Bill Clinton are now using tempeh to assert their superiority. As are Bill Ford, Twitter co-founder Biz Stone, venture capitalist Joi Ito, Whole Foods Market CEO John Mackey, and Mike Tyson. Yes, Mike Tyson, a man who once chewed on human ear, is now vegan. His dietary habit isn’t nearly as impressive as that of Alec Baldwin, though, who has found a way to be both vegan and fat at the same time.

Located on the 3rd floor of a walk up, Soland can take a bit of work to find. The decor is sparse and very low key. The furnishings look more at home in a country cottage, rather than in a restaurant in the heart of cosmopolitan Hong Kong. It is usually quiet, even when full, so makes a nice getaway from the crowds and noise. For some reason, vegetarians tend to speak in hushed voices, rather than shouting at people two feet away from them (as many patrons of local diners seem to do). The owner/waiter is mellow and relaxed, never trying to rush you out the door to accommodate the next patron.  END_OF_DOCUMENT_TOKEN_TO_BE_REPLACED 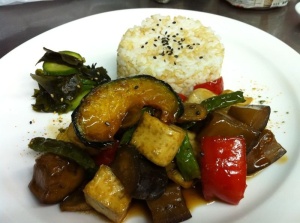 FOOD RATING Delicious. A highly satisfying experience at a reasonable price. A great way to eat green without sacrificing taste.

World Peace Cafe (WPC) is an organic vegetarian restaurant and cafe run by dedicated volunteers. Its a tranquil spot for lunch (Mon-Sat) or dinner (Fri, Sat only) in the heart of busy Wanchai.

LUNCH
Like most non-vegetarians, you may be wondering can a meal without meat really be satisfying? The answer is a definite yes! The 4 course set menu that changes weekly (includes a soup, appetizer, main, desert and a choice of fair-trade coffee or herbal teas) will leave you feeling satisfied and energized. It’s a great choice if you’re looking for a healthy, delicious lunch that doesn’t weigh you down. END_OF_DOCUMENT_TOKEN_TO_BE_REPLACED